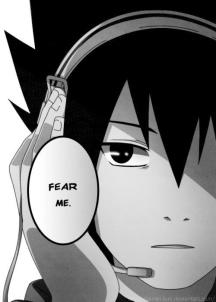 There were many times when I thought about doing something but then talked myself out of it. There was always a convenient excuse or a good enough reason to not even try: Why bother? It’ll never work anyway.

It’s hard to let go of that fear when you’ve spent years allowing it to have a say, no matter how small, in your everyday life.

It takes a lot of work to stand up to that naysaying voice and go, ‘You know what? Screw you!’

That’s how it has been with writing. When I was a child, I had no qualms in drawing my own comics and making up short stories to go with them. I didn’t feel the need to share those at the time because they were just for my own fun. I created stories while playing with Lego and other action figures (I owned a lot of Japanese action figures at the time – it was an awesome era!). There was no fear.

When I was a teenager, I created a web-series on what used to be Geocities homepages. I wrote during whole summer holidays, creating outrageous storylines for my ensemble cast. It was an absolute blast. I even fooled myself into thinking that I was surely the first person to ever think of creating a web-series. I wasn’t the first. But the other writers were very kind and supportive.

Glad to see that the writing community hasn’t turned sour since then.

I have found that fire again after being lost for a very long time. At some point I had decided that earning money had become more important than anything else, including my happiness. I was adulting, as they say. I was listening to fear. The naysaying voice had won and claimed its territory for that time. But then I found my fire again and fought back.

I am now happier as I am doing what I am meant to do.

Somehow, this has also opened something else in my mind. Something that had been closed, unbeknownst to me, since my teenage years. The willingness to dare. To do what I wanted to do even if it meant making a fool of myself. Some would say that choosing to be an author is just that.

Why would I willingly choose a career that will condemn me to slave away for ages with no guarantee of financial reward?

Well, because that’s what I’m meant to do.

So today I dare again. Try things that may seem foolish or pointless. It can take many forms. It can be through my writing, through my creativity or even through my everyday life. It can also be simply daring to dream.

With that in mind, I decided to leap into the world of YouTube.

I had been thinking about this for the past two years or so. I am one of those people who spend hours upon hours watching content creators on YouTube and Twitch. There are some real gems out there. I do have a passion for film and television and visual stuff in general. I love gaming, graphic novels, and animation.

I thought why not become a content creator as a way to put that side of my creativity to use? I’ll dare.

I’ve got to say that I had forgotten just how long it takes to make videos. It takes a very long time. You have to have the patience for it. Same with writing. But the important part of making videos is to enjoy making them. I had a lot of fun testing angles, colours, framing, audio, backdrops, and titles.

It also means it’s going to make me even busier this year and moving forward. In between writing and making videos, I won’t even have time to play any games.

I like this year already. Someone told me recently that there’s something different about me. Something about my aura had changed. I am radiating something. I know what that is. That’s happiness.

Happiness in knowing that I am going in the right direction for me.

It’ll be a difficult road with no guarantee of rewards but at the very least, I’ll feel alive.